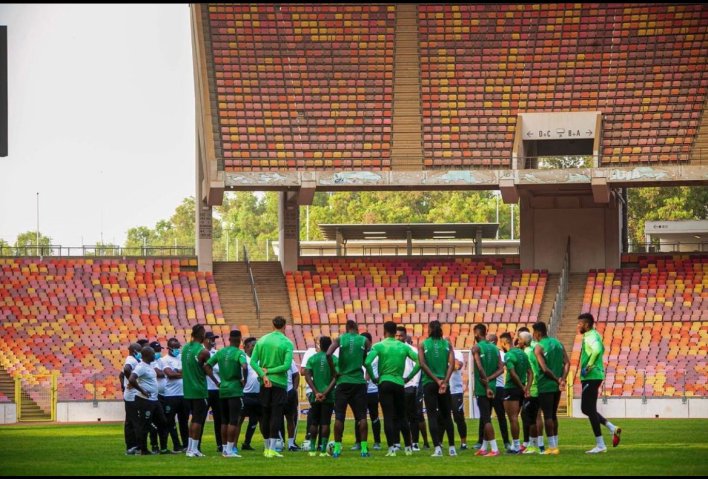 The senior national team of Nigeria had their first training session in Cameroon following their arrival for the 2021 Africa Cup of Nations which starts on the 9th of January.

Training was held at the lush green VSTS-Annex of Roumde Adjo stadium in  Garoua, the city where the Nigerian team will be based for all of their group games which starts with a game against Egypt on the 11th of January.

Interim coach of the team Austine Eguavoen started the session by splitting them into a group of four with his assistants Paul Aigbogun, Salisu Yusuf and Joseph Yobo handling various groups for warm up drills.

Goalkeeper’s coach of the team Alloy Agu later took the four goalkeppers namely Francis Uzoho, Daniel Akpeyi, Maduka Okoye and John Noble for a special drill, which from what we say is same as the usual drill in Abuja.

After the tactical drills, the players had a mini test match among themselves with coach Eguavoen supervising. It was a session involving defenders and attackers and it lasted for an hour.

During the test match, Samuel Chukwueze came out top with his dazzling runs and close ball control proving to be a menace against the defenders he was up against. Other players who did well include Wilfred Ndidi, Moses Simon, Chidozie Awaziem and Sadiq Umar.

Wizkid did things worth more than N10M for me, but never gave me N10M cash – Ahmed admits (Video)