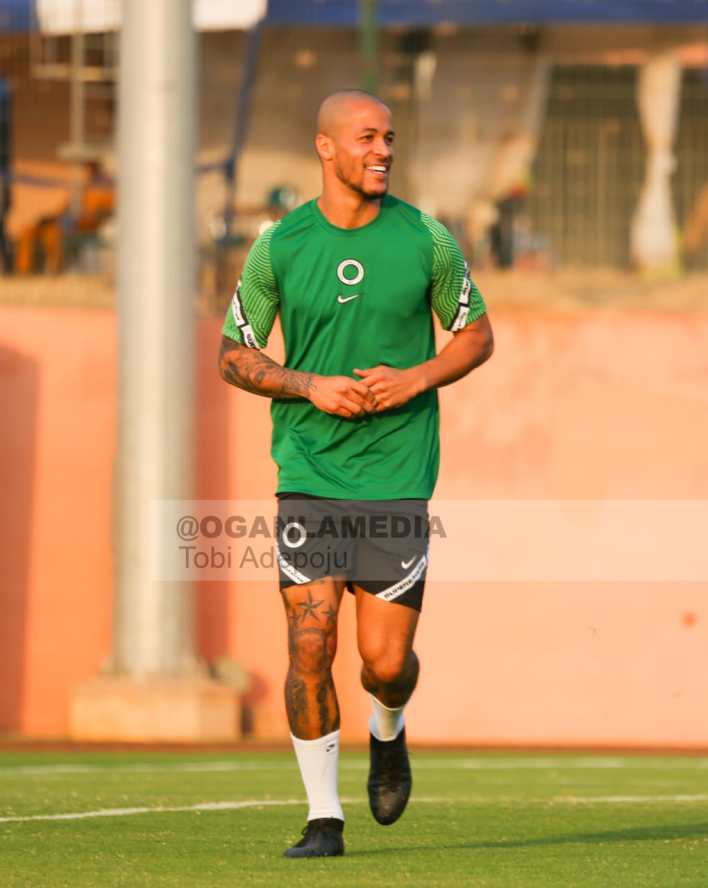 The team played have so far trained twice since arriving Cameroon and they also played a practice match against local Cameroon side Coton Sport two days ago.

Owngoalnigeria.com watched the session and also the friendly game are three things we spotted during the game and the two training sessions.

William Troost Ekong Is Suspect – Fair to say he is not in the best of form at the moment but dropping him doesn’t look like an option at the moment in the absence of his other established partner Leon Balogun.

He looks certain to start with either Chidozie Awaziem or Kenneth Omeruo as his partner per his position as vice captain and one of the leaders in the team but if form is anything to go by then he should be dropped to the bench.

Ekong didn’t look entirely comfortable against Coton Sport despite the Super Eagles convincing win. Shaky with the ball at his feet, his poor judgement and movement was also noticeable during the game. He has fared any better in training as per our count, he is the defender who has been dribbled past more than any other.

Ejuke Not Comfortable As Number 10 – CSKA Moscow winger Chidera Ejuke has been auditioning as the number ten of the Super Eagles since the start of training for the AFCON and coach Eguavoen has hinted that he could play in that role at the tournament.

However it appears to be a decision base on his ability to get past his opponent above anything else. So far he has succeeded in stamping his mark as the best in that regards but nothing by way of creativity has come off his boot. He doesn’t look quite suited for that role as his distribution has been hit and miss in training and even the practice match.

Misfiring Strikers – Interim coach of the Nigerian team Austin Eguavoen lamented the teams lack of presence when they attack by asking for more numbers in the box but that is the least of the problems they are facing in attack.

So far Taiwo Awoniyi has only impressed in shooting drills but went missing in the practice match and also yet to score in any full training session. He hasn’t shown the sharpness that has been the highlight of his game so far in the Bundesliga for Union Berlin.

Sadiq Umar hit a hattrick in training and also shows his predatory instinct in drills on finishing. The one issue is getting the team to play to his strength which is crossing of balls into the box because he is the type of striker who thrives when the supply is crisp and steady. That hasn’t been the case so far.

No Be Portable Car Be This? – Reactions Trail Video Of Okada Being Used To Push A Faulty Car (Video)

4 Hottest Girls Davido Has Slept With

AFCON 2021 Champions To Get $5m As CAF Raises Prize Money

I Respect Him, I Won’t Reply Him- Egypt Star Salah Plays Down Ahmed Musa’s Jibe At Him

“Showcasing what we do for a living” – Businessman, Obi Cubana writes as he shows off his first ever night club building (video)