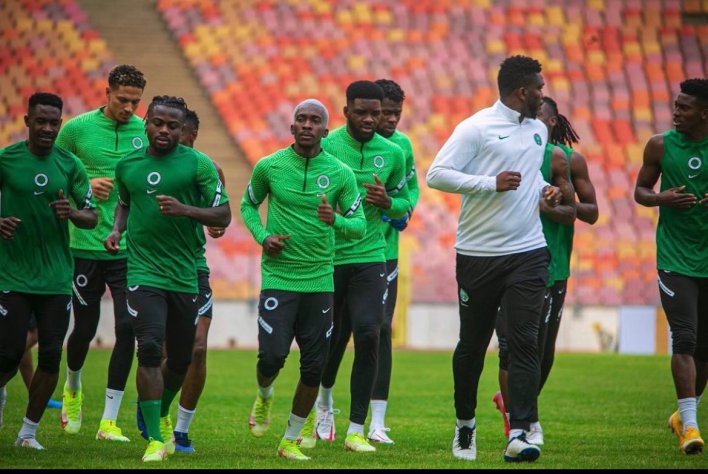 The senior national team of Nigeria returned back to training today after yesterday’s 2-0 win over Coton Sport in a friendly game as part of preparations for the 2021 Africa Cup of Nations.

Interim coach Austine Eguavoen separated the players into two teams and have them play a practice match after the usual drills and tactical session.

In Yesterday’s friendly game, Moses Simon assisted Samuel Chukwueze for the second goal and today Chukwueze returned the favour by teeing up the Nantes winger, who fired home a low fierce drive past goalkepper Francis Uzoho.

Kelechi Nwakali showed his dead ball abilities when he hit a curler which was parried by Uzoho unto the path of the rushing Henry Onyekuru, who stabbed the rebound home for his team’s other goal.

Below is how they were lined up during the course of the practice match which as said above ended 2-0 in favour of the team who were in yellow bibs during the session.

How Super Eagles Players Lined Up In Today's Training - Team A Vs Team B; Simon Scores, Nwakali Shines